Chris Recchia defends his changes to the DPS status report to the Senate Finance committee:
https://youtu.be/fY64eWVqhHI 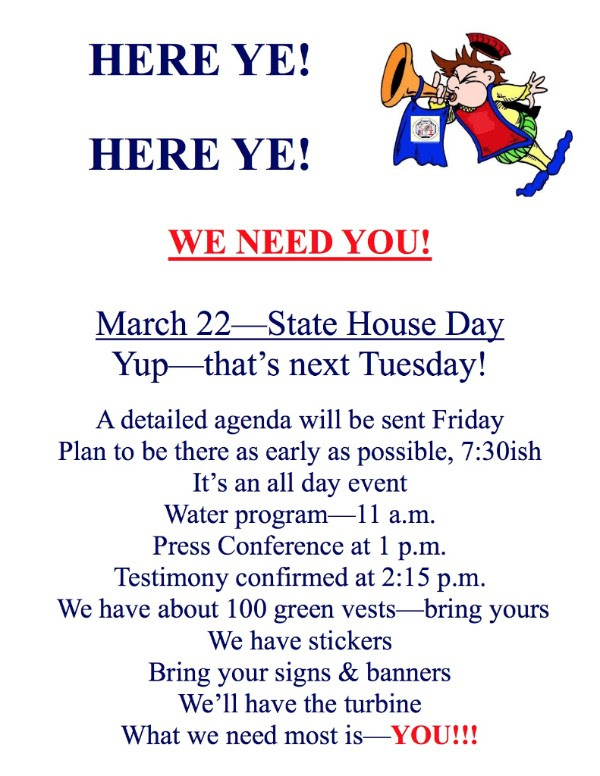 Montpelier, March, 18, 2016 –  On March 22 from 8 a.m. to 4:00 p.m. at the State House in Montpelier, Vermonters with the Energy Transformation Coalition (ETC), and Energize Vermont will host an informational and educational day focused on reviewing how Vermont has approached it’s renewable energy goals.

The Coalition consists of proponents of small-scale green renewables throughout the state. The Coalition opposes large, industrial-scale energy projects that pose real harm to Vermonters and Vermont’s highly regarded quality of life.

“The stated goal of 90 percent renewables by 2050 by any means possible is a recipe for disaster…and the people of this state will not continue to sit by quietly anymore”, stated Sally Collopy, a Fairfield resident.  “A measured, thoughtful approach in how to achieve this lofty goal, with regards to the health of our people, wildlife and the land, is all we’re asking for.”

Many towns have adopted plans that limit the size of a renewable energy project or require proper setbacks. On January 20th, our first State House Day, the Coalition presented The Rutland Town Resolution. Sixty-eight municipalities were signed on as of Jan 20. Now, 118 municipalities are calling to use our land use law Act 250, and to enable communities, developers and utilities to work together. Total municipalities involved in our energy rebellion is 127. If we do not move to Act 250, we request Counsel for the Public in the Public Service Board process so that there is access to the legal regulatory process.

Collopy also said that, since the Coalition’s last State House day in January, “As of now, no meaningful bill is on the table that protects Vermonters’ health, property values and amazing natural beauty.”

Senator John Rodgers is a leader in responsible energy development. He made the following statement at the January State House day: “We believe Vermonters are capable of working together at the local, regional, and state levels to create a sustainable energy future. This would provide broad benefits without contributing to environmental destruction, concentration of wealth in the hands of a limited number of developers, and unintended consequences such as loss of human health, property value, and trust among neighbors.”

Activities planned throughout the day include committee testimony, an educational movie at 11 a.m., and a 1 p.m. press conference with gubernatorial candidates.

Reports from across the globe are showing evidence that industrial wind turbines cause physical and health issues in people that live too close to them. These range from sleeplessness to high blood pressure and more.

Swanton resident Christine Lang, who lives just 2,000 feet away from the proposed Swanton Wind project says: “According to the State, these will do nothing to improve our carbon footprint. Take the money that is being spent now on these pointless, destructive projects and put it into Research and Development to do renewable energy the right way for Vermonters.”

Video of Melodie, Robbin and Luann testifying to Senate Health & Welfare this morning, 30 minutes
https://youtu.be/3KtlBXyD7w4
Testimony in Senate Natural Resources Committee is being converted, then will be uploaded and processed, will send out that link later or you can look for it on the same youtube channel the other videos are posted on.
Press Conference Video
https://youtu.be/mbNpjd3zxII
Testimony in House Natural Resources Committee (morning) is on my camera and I’ll do it after the SNRE one is finished.
We did not get video testimony of the afternoon House NRE committee testimony, we will get the audio.  There was also testimony in Senate/House Ag (chairs and a few committee members but no David Zuckerman), and SenateGov. Ops.  We will get those audios.
The WCAX coverage was the best TV, video was just posted.
http://www.wcax.com/story/31014974/vermont-towns-show-frustrtaion-about-renewable-energy-projects-siting
WPTZ TV coverage, gave more time to the proponents
http://www.wptz.com/news/vermonters-rally-at-statehouse-for-new-rules-governing-industrial-wind-projects/37537588
VPR has become lame
http://digital.vpr.net/post/local-officials-want-voice-review-renewable-projects
Short AP piece, this is what will show up in all the local papers and get read on TV
Vermont towns seek stronger say on siting renewables

Agenda for the day: Jan20HandoutAM

We are going to the State House to be heard! For far too long, Vermonters have been suffering with a Public Service Board that doesn’t listen, an Energy Commisioner that doesn’t care, a governor with an agenda for 90% renewable energy independence by 2050 ….with no clear plan in place! Just build, build, blow up and we’ll see where we end up. Our State and its citizens are being destroyed to line the pockets of a few rich (and getting richer!) developers!
WE DEMAND PROPER SETBACKS, NOISE STANDARDS and thinking seriously and clearly before more industrial projects are built here. We don’t need Industrial Wind Turbines…they are just WRONG for our state (and almost everywhere else). We are for small-scale renewables and less consumption.We are for better use of our time & dollars for weatherization of our homes. We are for more efficient use of vehicles and public transportation.
JOIN US for a day where we WILL BE HEARD! Please wear GREEN (Dark is preferable, but any green will work) for our chamber demonstration or green safety vests….we must say “STOP!” the madness!!

DRAFT agenda of day so far:

We believe Vermonters are capable of working together at the local, regional, and state levels to create a sustainable energy future. This would provide broad benefits without contributing to envi-ronmental destruction, concentration of wealth in the hands of a limited number of developers, and unintended consequences such as loss of human health, property value, and trust among neighbors.

Speakers will focus on these guiding principles and include several presentations emphasizing the statewide support requesting legislators to adopt them.